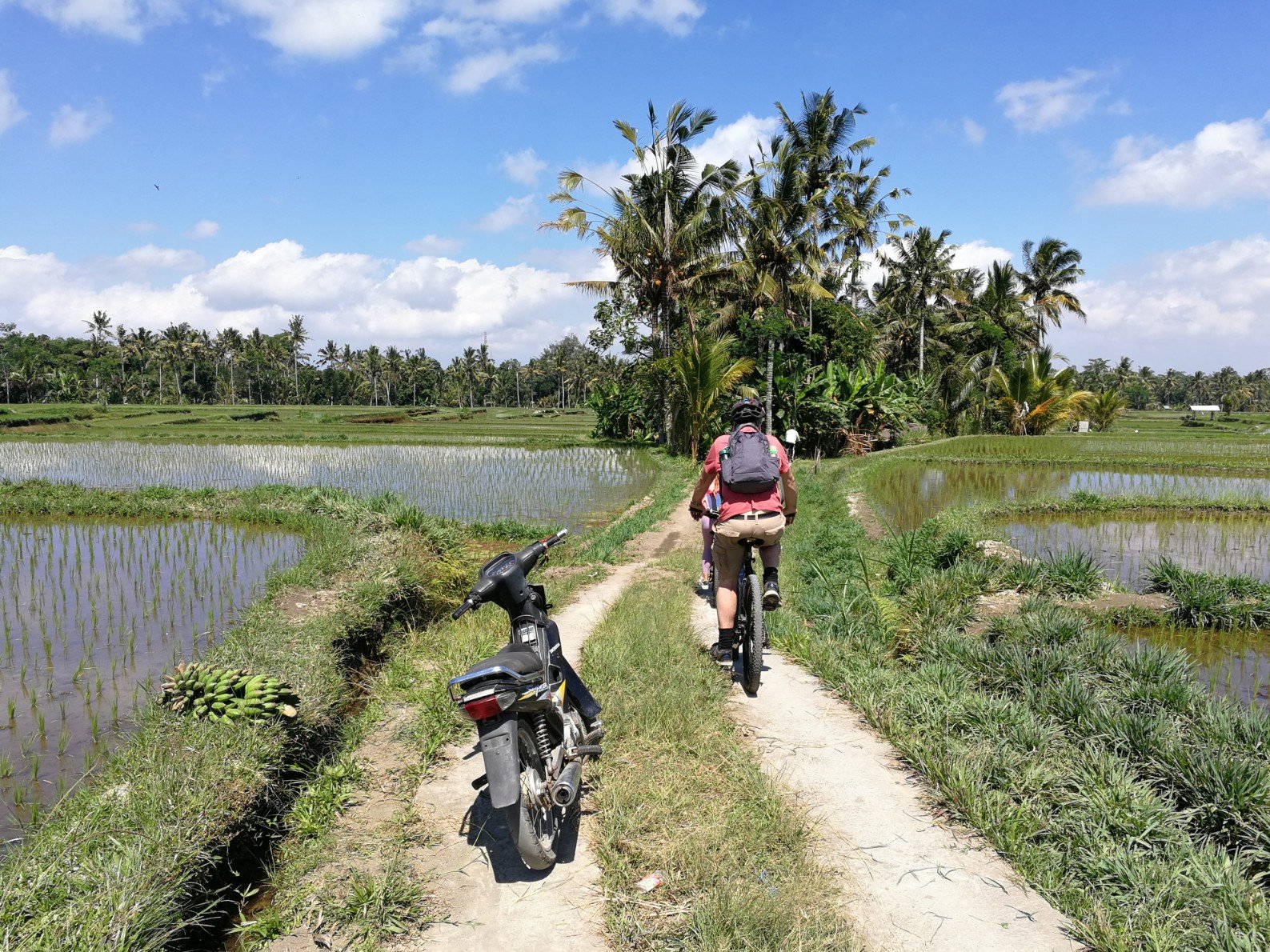 Today was apparently Mum’s favourite day of our holiday so far! We went on a cycling tour today: and although it’s called a cycling tour, it’s really a great all-around introduction to many Balinese things.

Following pickup at our hotel, we were taken to a warung for breakfast. Maybe indulging at the breakfast buffet at our hotel wasn’t necessary! The breakfast was not massive, but it was delicious, and a good way to begin the day, surrounded by rice fields. We also got to know our companion for the tour, a Korean teacher who went by the Anglicised name Chloe. She did tell us her actual name, but unfortunately, I struggle to remember it, let alone spell it. We also got to meet our guide for the day, named Made.

Following breakfast we headed further north and stopped at one of the many “coffee plantations” along the way. They are all largely the same, and this one was not really any different than any of the ones I have visited previously. They have a region at the entrance which includes stands of different trees, a few cages containing luwaks, a coffee roasting and grinding location, and offer tastings of many different types of teas and coffees.

Mum was most excited to try all the teas, and ended up buying a couple. I remembered that most were very sweet, which was confirmed after I tried a few. The view was quite amazing, however, as the location we were sitting looked over a jungle-filled valley.

After finishing at the coffee place, we were taken up to Kintamani so that we would have the opportunity to view the crater, Mt. Batur, and Lake Batur. A cloud obscured any potential view of Mt. Agung, but probably only added to the picturesque scene. Dad was most surprised by how obvious the black lava of Mt. Batur’s 1968 eruption remained. While we were observing the view, our guide was enthusiastically explaining some things to us, resulting in him putting his elbow through a light fixture, smashing it! Oops! I was glad it wasn’t me.

From here we headed a little way downhill to a family compound where we were finally united with our bikes. We also used the facilities here, and Mum had her first experience with an Indonesian squat toilet. After checking and adjusting our bikes, we started our roll down towards Ubud. Thanks to the slope, there were very few times where we were actually required to pedal.

There were a couple of stops along the way where Made explained some things in greater detail. First, at a temple, he explained the different Balinese Hindu village temples, along with some of their beliefs regarding the work of their gods, and the ceremonies surrounding birth and death. We also stopped at some rice fields (twice) to look at rice at various stages of its growth. We also stopped outside the Indonesian Presidential Palace in Bali (Istana Kepresidenan Tampaksiring).

Finally, we arrived at the home of the tour organiser, where we were treated to a lovely Balinese buffet lunch, which included some of the better Balinese food I have had.

This afternoon Dad and I walked along the Campuhan Ridge walk, and this evening we had a lovely dinner at AMSA Warung. I’ll have to record all the details tomorrow, since it’s getting a bit late for another post.

Leave a Reply to B & K Vermeulen Cancel reply