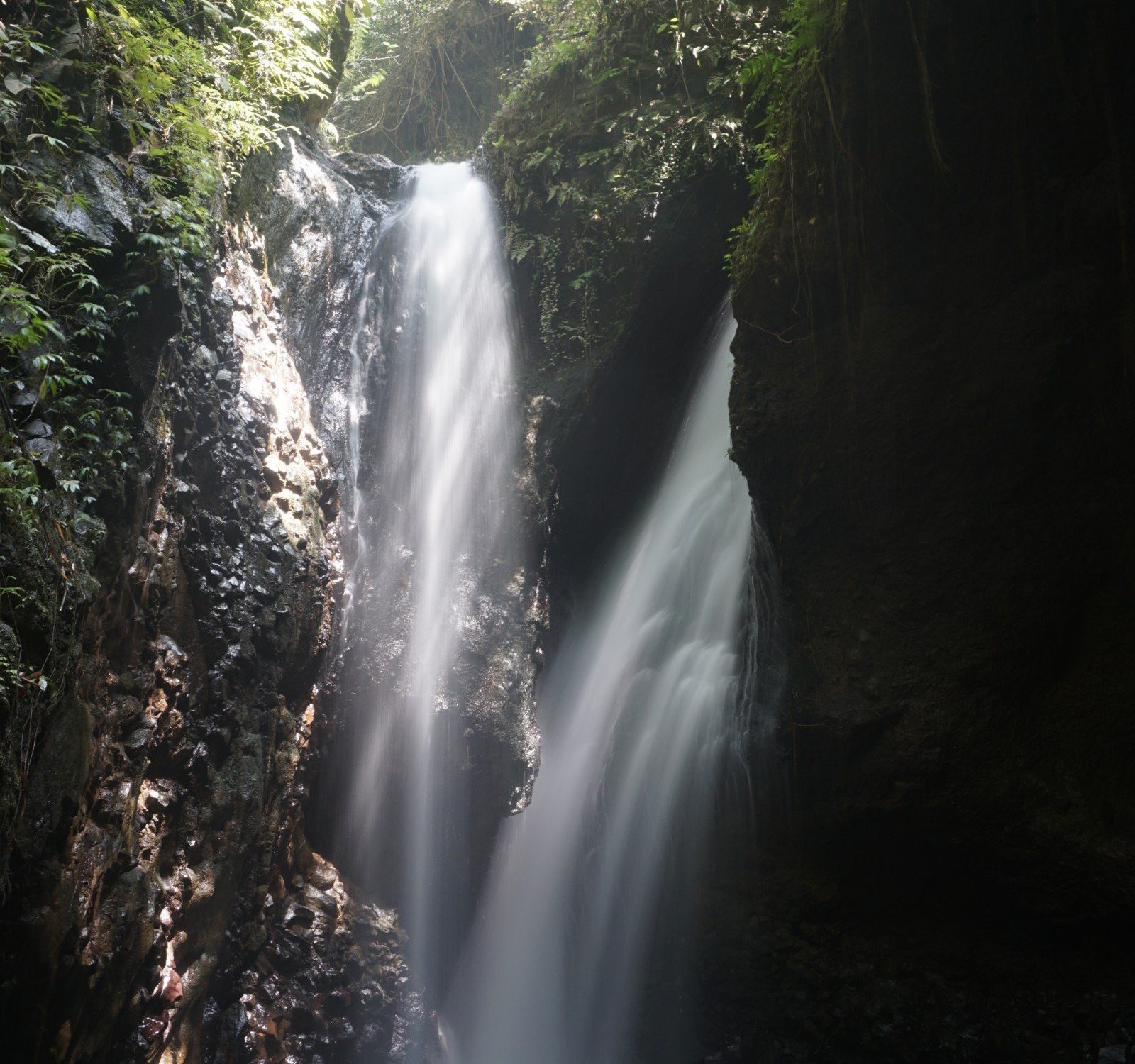 After our visit to Bedugul, we continued further north to the GitGit region in search of waterfalls. The drive north took us through a very mountainous region, following a twisting and winding road. Along the road we saw a section where some monkeys live, and then further along workings for a new road going in to bypass the twisting winding road.

Once we reached the waterfalls, our driver parked on the side of the road, and he escorted us down to the start of the path to the waterfalls. A local guide also followed along, explaining that if we wanted we could hire a guide and then the entrance fee for the waterfalls would be included. I had done a little research online before, and read stories of people being convinced they needed a guide, and paying up to ten times the entrance fee per person for the guide. I had also read that a guide wasn’t really necessary, so I suggested to the local guide that we would see how we went on our own.

After passing a few young kids selling assorted trinkets, we arrived at the location where you pay an entrance fee. We weren’t really pressured into taking a guide here, so I’m not sure if that was because a guide hadn’t followed us down or because I looked like I knew what I was doing! We paid our rp. 20,000 entrance fee, and continued on down, past a couple of stalls selling souvenirs and food and drink, past some more kids selling items, and down quite a few stairs.

The waterfalls were beautiful, and from below the waterfalls we had a view all the way to Lovina and the coast. It was quite hard to distinguish the ocean from the land because there was a lot of smoke and haze about. There are twin waterfalls, along with a smaller stream, and then below that a larger waterfall. There are also some smaller waterfalls off the side. We didn’t go further down, as there are a large number of swings and Instagram-baiting photo spots there, along with someone who looked ready to receive payment for accessing those swings.

After snapping a few photos, I got my tripod and ND filter out to finally try my hand at some waterfall photos. I was pleasantly surprised by how nicely the photos turned out. While I was doing this, Dad decided to jump in the water. He then wanted to use the rope swing there, but was told that would cost an additional rp. 70,000. He decided not to do that. Besides some locals swimming, there were also a few tourists busy posing for a variety of photos in bikinis while standing underneath the waterfalls.

Finally, leaving the falls, we again had to dodge the kids with their plaintive pleas to buy things so they could go to school.

The falls were an amazing sight, despite the tourist traps around there. Amazing sights, and an amazing God who made us to appreciate their beauty!